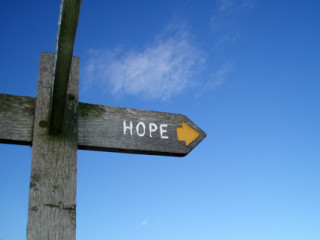 The history of Hope Prison Ministry is also the story of two people who set out in faith to serve the Lord at Pollsmoor – Jonathan Clayton and Jenny Joshua, who ended up as husband and wife.

The story began on 1 January 1989 when Jenny visited Jonathan, a long standing friend who was serving a prison sentence for fraud.  At that time, Jenny had graduated from theological college and was working in full-time ministry for the Africa Evangelical Fellowship.  The visit opened Jenny’s eyes to the great need for God’s work in the prison environment.

Over time Jenny mobilized a team from Strandfontein Baptist Church to visit individual prisoners and give them hope and encouragement.  A short while after his release, Jonathan was allowed to join the team.  In 1995, the couple managed to obtain status as spiritual workers and started outreach services in Pollsmoor.

Jonathan graduated from the Baptist seminary in 1998, and he and Jenny made the decision to answer the call to full-time prison ministry.  The Baptist union brought them in touch with Hope Now, a charity based in the U.K working in orphanages and prisons.  This led to an offer of financial support for the prison ministry at Pollsmoor, to be led by Jonathan and Jenny.  After a few years, Hope Now felt that the fledgling ministry was ready to fly solo, and Hope Prison Ministry was born as an independent South African organisation on 1 July 2003.

Hope Prison Ministry is now the largest ministry of its kind in South Africa, with over 150 workers providing spiritual care, counseling, life skills and rehabilitative programmes to clients in nineteen correctional facilities throughout the Western Cape.